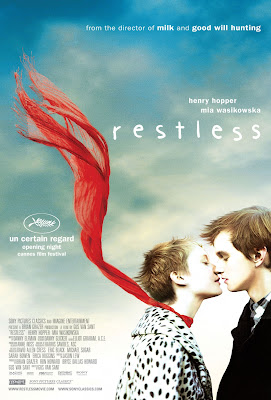 Another day, another cancer movie.  I'm not saying that in any bad way, because this weekend gave us the fantastic '50/50,' a movie that I strongly recommend you to check out.  This film has been delayed for about eight months, with Sony wanting to screen this movie at Cannes back in May.  Anticipation for this film was fairly high, being directed by Gus Van Sant, of the award winning films 'Milk' and 'Good Will Hunting, as well as starring Australian favorite Mia Wasikowska from 'Alice in Wonderland' and 'The Kids Are All Right.'  Going into this movie, I had no idea what to expect.  Reception is mixed on this one, so it was kind of a mixed bag for this 91 minute drama.  With the added fact that I was the ONLY PERSON in the auditorium on a Sunday afternoon, my excitement for the movie dropped a bit.  Despite these worries and disappointments, I still had my eyes glued to the screen with my mind open like a book.  If there's any way to describe this film to a movie buff, I'd say that it's "The Art of Getting By with Cancer."  Don't worry, that's a good thing.  This movie wasn't like 'Art' because it was predictable, short, and unoriginal."  I give my comparison between the two because of the sweet, light hearted relationship between their two teen leads.  I doubt that this movie is going to get a lot of business, due to the lack of marketing and the mixed reception.  Howevder for what it is, 'Restless' is a real, touching, and sweet cancer/coming of age movie.  Any teen will find it hard to not compare to the chemistry between Hopper and Wasikowska.

Enoch Brae is a teenage guy with a huge dramatic past.  His parents were killed in a car accident, he was kicked out of school for unknown reasons, and most of all, he can talk to Hiroshi, the ghost of a Kamikaze fighter pilot.  Just for something to do, Enoch crashes the funerals of complete strangers from all over town, on the verge of getting into trouble with the law for it.  But alas a miracle comes Enoch's way, and her name is Annabel.  Annabel is a sweet, optimistic young lady who turns out to be a terminally ill cancer patient.  With only three months to live, (they say this in the trailer, so it's not a spoiler.)  Enoch and Annabel spend every waking minute making each day the best day of Annabel's life.  Fortunately, Enoch and Annabel's relationship blossoms into something more than everyday teen love.

The only experience that I have with Mia Wasikowska is the 2010 3D fantasy 'Alice in Wonderland,' where she was awesome and a badass at the same time.  I have yet to see 'Jane Eyre,' which I've heard from many is a very good adaptation.  In this movie, Wasikowska plays Annabel, the cancer patient with a very limited amount of time left on Earth.  Her performance is far from Oscar worthy, no doubt.  However with all of the trampy girls in movies these days, Wasikowska plays such a sweet and innocent role that it may just be the best thing about this movie.  When you see her just ignoring death and living life to its fullest, it just makes you feel so pure inside.  She really makes this movie, without a doubt.  It's kind of ironic that I make the 'Art Of Getting By' comparison, because Wasikowska, an Australian, and Freddie Highmore, an English man, were the best parts out of those two movies.  Gotta love the foreigners, don't we America?  As for the male lead Henry Hopper, he was okay during the first half of the movie.  The second half however really showed a dark and more fascinating side of his character, which all the more makes the character very relatable.  As I have read, this is Hopper's first acting job, so it's no surprise that he's on a rough start.  I see a future with this guy; and if he's able to work with the director of 'Milk,' then I wouldn't be surprised if more directors start to present him with more roles.

With every decent movie out there there has to be flaws.  I found that almost every time Hopper and Wasikowska were speaking an having nice conversations, Wasikowska's character Annabel says something involving her quickly approaching demise.  I found it to be a very annoying flaw in the script, because I don't know many people who just talk with people and out of nowhere infer that they are quickly dying.  It's kind of like Heather Graham in the Austin Powers sequel, 'The Spy Who Shagged Me.' (In my opinion the funniest Austin Powers film, but that's not the point right now)  Every time Austin said something smooth, Graham's character Felicity Shagwell says some dopey catchphrase/ line saying something like "I'm better off my feet" or "You can have me if you wanna."  Do you seriously expect me to sit around enjoying a movie and let a dumb line like this just pass over my head?  It just felt really cheesy that they had to have Annabel reference her death in every other scene.  Sorry to bore you with that, how about another flaw?  Oh here's one: Hopper's acting.  The first half/two thirds of the movie had Hopper walking around, talking to this Japanese ghost looked sad and mopey all the time.  He wasn't as much a cardboard cutout as any porn teen in a slasher flick, but for a guy being the son of Dennis Hopper, there is more to yearn for in his role.  Still, there was that strong second half to boost his acting skills o an "average."  I don't want to bore you anymore with my complaints, so let's end this review up on a high note, okay?

'Restless' is as real as a movie can get.  Sure it's very fluffy and mushy, but the acting between the two leads, as well as their charming chemistry together made this a very enjoyable experience for me.  People are really bashing on this movie right now, and this hasn't even made $20,000 at the box office yet.  Is it because you go in expecting a tour-de-force like 'Good Will Hunting' and walk out disappointed that you didn't get what you ordered?  I'd guess so, but I can see why they're upset.  I've never seen any of Gus Van Sant's previous work, but I've heard those were excellent, which explains why two of them got Best Picture Oscar nominations.  I would be disappointed if George Lucas went back into the superb Star Wars franchise and made prequels to them showing Darth Vadar's back story.  Oh wait a minute...  It sucks when a director steps a notch down from his previous work, but can't you just see a movie for what it is rather than what the director has not made.  This is a sweet, light, real movie that touched my inner soul.  I wouldn't see this again in a theater.  However when it comes on Starz in about a year, you can count me in on that.  If you like a pure sweet heart filled with good acting and a tear jerking final act, stay up late tonight, because when this movie's done, you're going to feel light on you feet and 'Restless' until you hit your pillow immediately after putting on your P.J.'s.