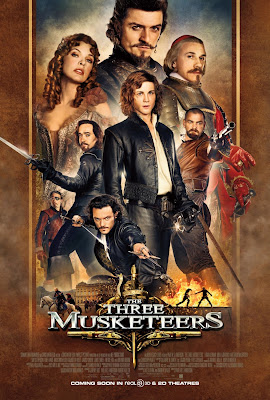 Rum, swearing, swords, and chicks. The latest adaptation of the classic 'Three Musketeers' story has all of that, plus a huge pile of corniness plopped on like stuffing at a school luncheon. I personally wasn't looking entirely forward to seeing 'The Three Musketeers,' mainly because I didn't think it looked very interesting. Plus from the trailers you saw shades of wooden acting, tons of CGI, useless 3D, pointless romances, etc. However when the credits started rolling, I metaphorically stared at myself and realized that all the things in the trailer that ticked me off were actually all of the reasons why I enjoyed the movie. Sure it may be the stupidest thing to come out all year, but I just sat back and had a fun time. I doubt that many adults will flock to the theater and see this, because I know right now that 60-80% of regular adults will not like this film. For example, my dad hated 'The Green Hornet' (ironically also with Christolph Waltz who plays a bad guy in this movie) when he took a few friends of mine, myself, and my family to see it. I enjoyed that film for its utter stupidity, and that's exactly why I liked this movie. Young boys will love it, and a select group of audience members will enjoy it. The movie is supposed to be subpar, so why not just go in and just enjoy yourself. Sure it maybe the dumbest two hours you spend in a theater this year, but all you have to do is sit back, relax, and enjoy the show. It's nothing near perfection, but 'The Three Musketeers' is a stupid, pointless, yet fun time at the movies, as long as 2D is your only option.


SYNOPSIS: (Courtesy of Fandango.com)
D'Artagnan (Logan Lerman) leaves his home in rural France to fulfill his ambition of becoming one of the king's elite guardsmen, the Musketeers. In Paris he meets Athos (Matthew MacFadyen), Porthos (Ray Stevenson) and Aramis (Luke Evans) -- three of the king's finest swordsmen, who have been laid low by Milady De Winter's (Milla Jovovich) betrayal. D'Artagnan rallies his new friends to foil Cardinal Richelieu's (Christoph Waltz) plot to overthrow the monarchy and crown himself king of France

I honestly think that director Paul W.S. Anderson of the 'Resident Evil' franchise really wanted to make this movie as crappy as possible. One of the ways that the movie tries to be bad is the way the script is written. I've never read the original 'Three Musketeers' stories before or saw any of the movies, (other than a Mickey Mouse version several years back) so I had no previous experience with the famous tale. However I can say that they made this movie way to modern for fans of the original tale. The only time you ever believe you’re in the olden times is during the exterior shots and this one scene at the beginning of the film involving the young Musketeer D'Artagnan training with his father. Other than that, the film never feels like an old tale reinvented. It's more like a high tech, potty mouthed, modern version of 'The Three Musketeers.' You have flying ships for crying out loud, plus words like s**t and a** used frequently by The Musketeers and the people around them. I highly doubt that the generation with "Where are thou, Romeo?" used modern day language. It's not just the modern language and the obscene sci fi/modern elements that make this movie stupid, it's also because of the predictable plot points that even an infant could figure out. I just spent an entire paragraph writing about the script, but that's not even the worst thing about the movie: the acting is.

The "all-star" cast of this movie includes Logan Lerman of the 'Percy Jackson' movie, Academy Award winning actor (Nazi in 'Inglorious Bastards') Christolph Waltz, and Orlando Bloom of 'Pirates of the Caribbean' and 'Lord of the Rings.' Of all of the actors in this film, my favorite ones were Orlando Bloom and Christolph Waltz. Sure they were villains, but to me they were the most interesting characters of the film, though it isn't exactly saying much. They were still pretty bad overall, but they had more substance than the other actors did. Logan Lerman is supposed to be the character we look up to and love, which apparently the audience at my screening did. It still doesn't change the fact that his acting was as wooden as a log cabin. Don't worry Lerman fans; he's not the worst part of this movie. Unfortunately gentleman, Milla Jovovich is the worst thing in this movie.

The only time I've ever seen her in a movie was the 2001 comedy 'Zoolander,' and she could really kick ass in that film. Come to today, over a decade later, and she's stuck in movies directed by her husband, Paul W.S. Anderson, which to me is very unfortunate. This character wasn't even relevant to the story, she just seemed to be there for killing people in slow-mo fashion, making out with bearded men, and saying the dumbest catchphrase lines the world has ever heard. The actress is talented, I can say, but she really needs to stop doing 'Resident Evil' movies and get on with a more interesting career. The rest of the cast, including the title characters, are pretty bad, but they can be funny at the right times and kick some ass during the battle sequences.

So is 'The Three Musketeers' a great movie? No. Is it a bad movie? Yes and no. What I mean by that is, this movie has the potential of being the next 'Plan 9 from Outer Space,' meaning it's so bad you just go along for the ride and enjoy yourselves. I went in believing that this movie was going to suck beyond belief. I even was planning on calling the film "a tour-de-fart" if I hated the film so much. Unfortunately I can't use that creative line on this film, because this movie didn't suck. I mean, it did, but I enjoyed the awful factors of the film. The acting is wooden, the script is awful and predictable, and the 3D is cool but useless. I will however give the film credit for keeping the audience focused and in a fun mood with its creative plan in the end and the cool action scenes. Kids will enjoy it, but parents will be a mixed bag. I give you parents two options: either take your kids to an early morning 2D matinee show, or just rent the Charlie Sheen version and watch it at home. I had fun with this movie, and that's where I'm going to leave it. 'The Three Musketeers' is all cheese, yet very fun overall.