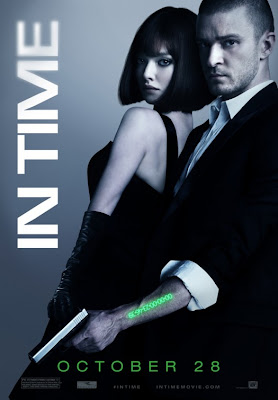 The hit song '4 Minutes' has just been turned into a metaphorical sci-fi flick, and it's called 'In Time.' Justin Timberlake's character Will Salsa (sorry, I meant Salas) lives in a world where time is the world's currency rather than money, so the rich can live forever while the poor try to just get through one day at a time. An original and awesome concept should not have just been an okay movie, but unfortunately it was. The trailers for the film made the movie look like a sleek action thriller with some cool sci-fi elements. However what was really served was a sappy romantic thriller with lots of running and little sci-fi. How could Timberlake, who only a year ago portrayed Sean Parker in 'The Social Network' pick such a poor script? Was it to "work" with Amanda Seyfried? The answer is unknown, but the important thing is that 'In Time' is the biggest disappointment of the fall season so far.


The acting was average for this type of movie. You had your good actors, like Justin Timberlake (in parts) and Cillian Murphy, and you had your wooden actors like Amanda Seyfried, who plays Sylvia, and Vincent Kartheiser, the guy who plays Sylvia's rich daddy. Justin Timberlake is not as terrible as you'd think except in one "emotional" scene where he's apparently trying to sob his eyes out. He's good for what the movie is, so let's leave it at that. Cillian Murphy is good in almost anything he's in, and he may be the best thing this film has to offer. Murphy may become the new William Fichtner, indicating that he almost always steals the show in any movie he's in. I know he did when he played Scarecrow in 'Batman Begins.' The one role that really surprised me was Alex Pettyfer as the leader of a mob squad called the "Minutemen," who at the beginning of the film is trying to get as much time as he can get his wrist (literally) on. Pettyfer is the same guy who was in the average 2011 flicks 'Beastly' and 'I Am Number Four,' as well as the fun but unknown 'Alex Rider: Operation Stormbreaker.' It turns out that when he's using his native Australian accent rather than a cheap American accent, Pettyfer can really be a good actor. He and Cillian Murphy to me make the film, with Timberlake coming in a distant third or fourth. Now, let's get onto the baddies of the flick.

Amanda Seyfried was good in 'Mamma Mia!,' and I heard she was great (and naked) in 'Chloe,' so I had hopes that she would be good. Unfortunately, what Seyfried executes in this film is the clichéd rich chick who wants to break free of her rich dad's clutches and when she does, she doesn't like it. I honestly think that the reason why Seyfried was cast for the role was to A.) attract men, B.) shoot a gun, and C.) get into a bra and make teen boys feel happy somewhere. Seyfried is a good actress when she puts her mind to it, but she just was bad in this movie. Then there's this actor who I've never heard of named Vincent Kartheiser who is the end all be all Razzie award winning actor of the year. There are planks next to a shed that my neighbor is building, and their acting could not have been as wooden or hollow as Kartheiser's acting. I've never seen him in anything, and his face looks pretty new to Hollywood, but he makes actors in a crappy spoof movie look like decent movie players. He was the worst, and that's that. The film also delivers small roles with Johnny Galecki and Olivia Wilde, who serve absolutely no purpose to the film but are decent actors. Why does Hollywood have to limit the good and 'Big Bang' actors in big budget A-star flicks?

The editing of the film is quite poor throughout. After (SPOILER!) Olivia Wilde dies from her time running out and Timberlake is sobbing his fake cries out, (END SPOILER!) he just goes on into the rich time zone with his new amount of time with no reaction to what happened 10 seconds later. What the hell is with that? You see fellow audience members, this is what happens when Fox releases a movie that's not as big as 'X-Men' or 'Planet of the Apes.' I blame Fox for their crappy movies because almost all of their movies either leaves out the real plot of the film, succeeded in choppy editing, or combining both elements to make a crappy movie. This film only did the second element, but the second element decreased from what could have been a solid sci-fi action flick. Andrew Niccol is a good screenwriter, having written 'The Truman Show' and 'The Terminal.' (I guess a "The" at the beginning of a title makes everything better) However his directing techniques are not as good. This sci-fi thriller turned into a sappy romantic thriller almost instantaneously, and who really wants to see that when what people came to see here was an awesome action movie set in the future. I still give Niccol props for coming up with one of the coolest metaphors to everyday life in recent history. Not many people have the creative mind of Niccol, and that should get some street credit in Hollywood.

This would be a great movie to see a director's cut for, because I could tell that Fox cut out important plot points in order to get Timberlake and Seyfried either into the next do or die situation or just running from nothing. A prime example of a 2011 film that would have been good if it wasn't chopped down originally was 'Sucker Punch.' The Zack Snyder movie was edited down to a PG-13 rating in order to get younger audiences into this nerd-tastic movie. Then for the Blu-Ray release Snyder released an R rated extended cut that put pieces of the storyline back together, hence a better movie. 'In Time' had a good movie inside of it, but the makers of the movie just couldn't get that greatness out. It's still amazing how such a cool premise and such a good cast could end up being in a mediocre movie. It's not bad as many things that have come out this year, but it is now on the now huge list of 2011's biggest disappointments. I don't regret spending two hours of my life sitting through this movie, but those two hours of my time could have been used in a better movie. The clocks ticking people, so are you going to see this movie or not?