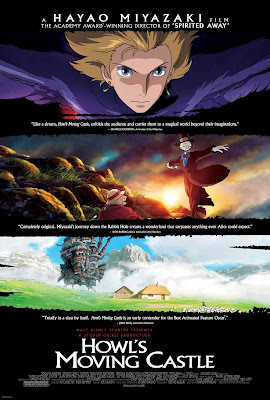 It's official: Japan is the animation capital of the world!  What's even more crazy about me making this assumption is that this was my first Anime movie outside of the 'Pokemon,' 'Naruto,' and 'Yu-Gi-Oh' franchises.  I've always heard that Hayao Miyazaki was a fantastic director, being at the helm of such recent classics like 'Spirited Away' and 'Ponyo,' but I just never got around to watching one of his films.  October 7, 2011 was the start of Yom Kippur, which is 24 hours of fasting and redemption from Hashem (G-D) for the new year.  My father was at synagogue, my mom out with a friend, and my sister also hanging out with a friend.  Just looking for something to do, I look to see what was on Starz at around 6:00, and sure enough I found something.  'Howl's Moving Castle' was the movie I chose, and I'm sure as hell overwhelmed by my super wise choice.  With the American voice talents of Christan Bale, Jean Simmons, (R.I.P.) and Billy Crystal included in the package, 'Howl's Moving Castle' is a magnificent animated flick.  It might actually be one of the best animated movies that I've ever seen, believe it or not!  Let me just tell you now before you get all angry at me that I'm not a huge fan of 'The Wizard Of Oz,' though it is still a good family movie.  The reason why I mention 'Oz' in this review is because this movie is 'Oz' for teenagers, or anyone who loves fantastic cinema.  'Howl's Moving Castle' is a sublime animated tour-de-force that should be watched by everyone for many generations to come.

Sophie is an 18 year old girl hat maker who has just been cursed by a powerful witch known as The Witch of the Waste, turning her into a weak 90 year old women with no chance of surviving on her own.  Just by the fate of luck, Sophie meets Howl, another powerful magician with dark secrets on his shoulder and a convenient way of traveling around the world.  The transportation? A huge ass moving castle run by a kind demon named Calcifer, who knows more about Howl than anyone does.  With the aid of a young apprentice named Markl and a moving scarecrow only known as "Turnip Head,"  Sophie will travel throughout the world to reclaim what is rightfully hers, even if that means risking her life against demonic demons out to get every witch and wizard alive to fight in an unnecessary war going on at the same time.

We are in the era where almost every kids movie out there is either using CGI, adding the dimension with 3D, or combining both to make a cool looking kids movie.  The rare examples of kids/animated movies being released using hand drawn animation include this year's 'Winnie The Pooh' and 'The Lion King 3D,' which only worked because there was nothing else playing for kids during the beginning/middle of September.  The film uses hand drawn manga animation, and it looks absolutely spectacular the moment the first frame of the movie hits your TV.  Hand drawn animation is never supposed to look as real as a Kodak picture, but you'll find it hard to ignore how detailed some of the animation looks, including the moving castle and the shocking look of the wrinkly, 90 year old Sophie.  The vision of this world is nothing less than extraordinary, and I now believe that Miyazaki may have the most creative mind of any movie director in history.  That may be a bold statement coming from a 14 year old teen who enjoys many others such as Tim Burton and Steven Spielberg, but Miyazaki has ways with his movies that make them so creative and unique that they pull you in just by looking at a poster.

The voice casting in this movie is quite incredible, despite not having the biggest names in Hollywood.  The most famous name out of the all star cast is Christan "Batman" Bale, who plays the wizard Howl.  I have never seen or even heard Bale be such a friendly soul before, especially after his rant on the "Terminator" set years ago.  In this movie he voices a character who is the combination of David Bowie in 'Labrynth' and a really really really nice wizard, like Dumbledore or Mickey Mouse.  You can also add "bad ass" to the combination because that is exactly what Howl is: a beautiful soul with the touch of a bad ass.  Another voice in this movie who can be highly praised is Billy Crystal as Calcifer, a talking flame of fire who controls Howl's Moving Castle.  Crystal at first is unrecognizable, but once he gets into his tantrums you know exactly who it is: MIKE WAZOWSKI!  The two leading men prove to be powerful additions to the movie, but what about the leading ladies?

Emily Mortimer and the late Jean Simmons portrayed the main character Sophie at two different stages in the twisted spell casted on by The Wicked Witch of the Waste.  Mortimer plays her when she's all young and at 18, being a pretty princess of sorts who doesn't want the life that her mother and sister have.  After the spell is casted on, Jean Simmons takes the vocals as the weak, old version of Sophie, who's desperately trying to survive.  I liked how in some scenes you see the transformation from one version to the other, and not only do you see the animation change, you also hear their voices change.  It's quite stunning when a team of professionals can pull this off, though it's much easier now than it was in 2004 when the film was originally released in Japan.  The voice talent itself is fantastic, Simmons providing for almost three quarters of the movie.  Basically all of the voice talent in this movie is superb, with no weak link to be found anywhere.  Sublime animation plus great voices equal an awesome animated spectacle of wonder and excitement.

In the years that I have been reviewing movies, this is by far the best animated movie out of them all.  Don't hate me for dissing Toy Story 3,' despite its awesomeness and tear jerking moments.  Rarely has a movie ever made me feel like a little kid eating a bunch of healthy sugary sweets at snack time during school.  This film is what I like to call 'The Wizard Of Oz' for every teenager of many generations to come.  The voices are fantastic, the animation is phenomenal, and the story is very creative and somewhat original.  The opening 20 minutes of the movie had my jaw hanging inches away from my carpet, because it felt as if my wildest dreams were stolen and projected onto my TV with the help of awesome anime and the "I'm not wearing hockey pants!" dude. (Epic Batman reference, hope you got it)  If you have Starz as part of your on demand selections and you have nothing to do at the moment or you are at your local library and they have this movie on the shelf, do yourself a favor and WATCH THIS MOVIE!  I am screaming at the top of my lungs to everyone I know (not really) that they must check this movie out.  Now I am telling you that if you're looking for a fantastic animated flick that's not exactly for kids, then start howling like a wolf and check out the awesomeness of 'Howl's Moving Castle.'